When we were in Brighton we went for a jaunt, food shopping to stock up Amelie for our next voyage west. Nick and I thought we could set ourselves and our crew Cate and Claire, a challenge: split into two groups, split the shopping list and see who could find more of their list plastic free...but feeling the potential crush of misery for the poor crew members slogging around Brighton hunting for something like halloumi plastic free, we decided to change tack. We’d all go together and we’d compare our plastic free shop between Brighton’s best and the giant ASDA, which hunkered down under the quarried cliff next to the marina.

Brandishing his phone, Nick declared the existence of a rebel supermarket HISBE, standing for How it Should Be. We rallied ourselves like wild goats, leaping and bounding towards the bus stop practically jumping aboard any bus west.

When we arrived in the city, we were pleasantly surprised to find that the local graffiti artists are quite direct in their messaging…”Your litter is killing marine sealife”. There is no chance for confusion here. 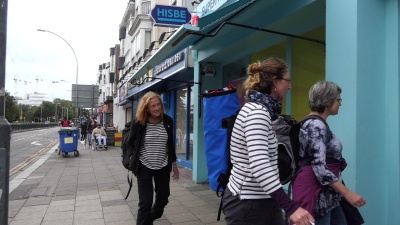 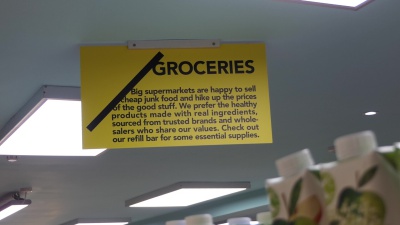 Dave, the store manager at HISBE, explained to us that the shop was developed to create a different approach to shopping, with more ethical principles, using local suppliers and less packaging. Having only been with HISBE for a few months he also shared his experience of Canada which has many bulk buy stores and a provincially administered bottle deposit return scheme. The bulk buy stores, while not intending to be low plastic, allow people to buy the quantities they want from big bins of food, and he suggested that was because people often have to drive long distances to go shopping. Coming back to the UK, he was somewhat shocked by how our supermarkets seem so far behind. 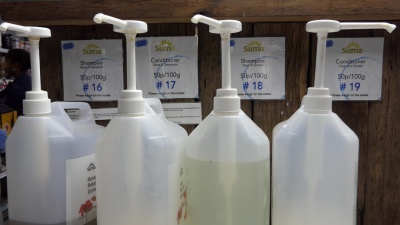 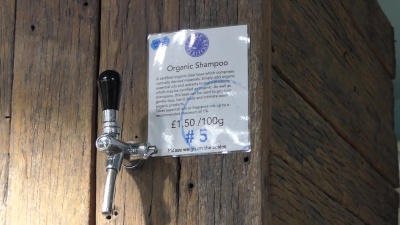 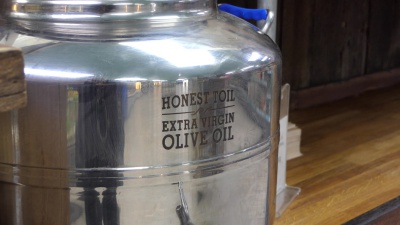 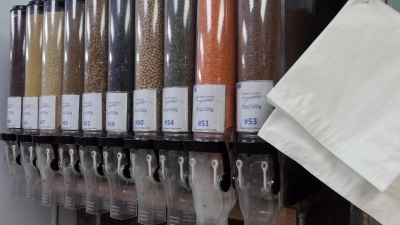 Looking around the funky, fun and welcoming HISBE store, we could see the range of veg and salads in the fridges and got talking about how they deal with food waste. Many arguments for the packaging of fresh food in plastic stem from the increase in shelf life which it enables, this is stated to reduce food waste in shops and homes. Sausages sealed into plastic trays with modified environments last three times longer, as does the famed shrink wrapped cucumber.

Recently, Dave said, they have had discussions amongst the staff to decide what is best to do with their fresh produce, especially lettuces, to keep veg fresh. They receive lettuce from the suppliers in plastic and could remove it before display, thereby making sure the plastic bag is appropriately handled by themselves. However, not only would that increase wilt, they also thought it would be unethical practice as customers may be misled into thinking that the lettuce had never been packaged in plastic in the first place. Did food waste come into the discussion? Yes, and all the fresh unsold food from the store goes to charity at the end of the day. 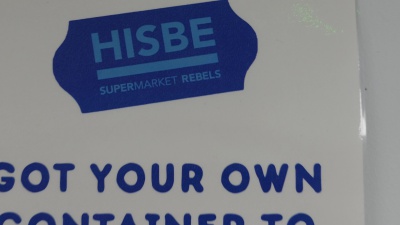 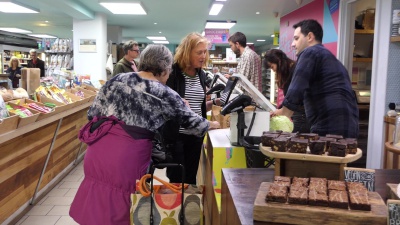 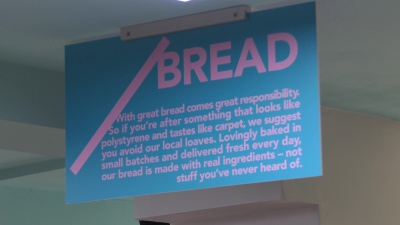 When we were in Guernsey, we were at Surf and Turf and bought the most amazing rainbow chard, which was stored stalk-down in water and covered over the top with a plastic bag - could a solution be a covered case with a slide back lid where veg could be placed in water? Instead, having also worked in other organic supermarkets in the Americas, Dave told of chiller cabinets that automatically mist the veg with water to keep freshness, but without the overwatering that leads to rot. So the technology exists, we just don’t have it in the UK.

Is plastic free becoming more popular we asked - yes, and they are looking to do what they can, with soap, shampoo, conditioner, washing up liquid and toilet cleaner refills; and dried food refills for pasta, rice, muesli, nuts, dried fruit and chocolate buttons! They are not plastic free by any stretch and as a small store do not have a meat or cheese counter, so these items are still packaged in plastic.

This, HISBE’s first store, is a pilot and as a new venture, they have learned from their mistakes, and now are planning to increase their number of stores. This is not a direct result of the increase in interest in plastic free, but we’re sure it has helped. Perhaps as part of the scaling up, meat and cheese counters could be introduced allowing people to bring their own boxes for these items.

With Dave’s approval we embarked on our shopping trip, seeking out plastic free peppers, aubergine, mushrooms, onions, fresh fruit, potatoes, tinned soup, butter, yoghurt, halloumi, creme fraiche, carrots, coconut milk, bacon, coffee, tea, chicken, curry paste, rice, muesli, eggs, milk, cheese, washing up liquid...etc. Most of the fruit and veg was loose and each box proudly sported a hashtag as a unique identifying number. Choose your crop, place it on the scales, hit its hashtag number on the display panel and out pops your label. Got a bag? Weigh it, zero the scales, park the reserved sign on the scales and then bag those round roots and head back to the weighing scales. Want meat and cheese? That’s packed in flexible heat sealed plastic bags...so not plastic free. Yoghurt was interesting as, in addition to unrecyclable pots, they had pouring yoghurt in a small plastic bottle, made of more widely recycled HDPE, similar to most milk bottles.

Rice? Well those little grains are waiting to emerge in a torrent from the mouth of the dispenser and unbalance any poorly supported paper bag. The milk chocolate buttons were much better behaved! Moving on to the wall of washing and toiletry dispensers, we refilled our own bottle with washing up liquid and then gathered at the checkout to load our shopping into the bags and rucksacks we brought with us, making sure we took a set of the attractive and eye catching information postcards about HISBEs take on food, seasonality and waste from the rack on the way out.

We found a café not long after and discussed our various responses to the shopping trip. Overall, we really liked the feel of the shop, how it looked so different from a supermarket, with the well-organised, shoulder high shelving giving a welcoming, open plan feeling. The action of dispensing our own food give us a buzz of excitement and let us choose the exact amount we wanted. We liked that! We also welcomed how likeable the staff were, all really engaged, chatty and knowledgeable; its a culture not a behaviour. We appreciated that the HISBE initiative was a truly local one and had the support of Brighton-based individuals and other sponsors to set it up. However, the final tally at the checkout was on the pricey side, and we did still came away with some items wrapped in plastic.

On to stage two of our compare and contrast shopping experiment, which did feel a little bit on the cheeky side. Grabbing a trolley, we infiltrated ASDA under the guise of Bank Holiday shoppers, taking great care to pick out all the same things as our HISBE shopping list. We wanted to see how many plastic free items we could find, and what their price was so we could make as direct a comparison as possible. We’d assumed that a megastore like ASDA was one of the worst places to find plastic free items and went about proving ourselves right. But...after going up and down the fruit and veg aisles and putting the equivalent shop to HISBE in our wonky-wheeled trolley, we had to concede that the only fresh items we couldn’t get plastic free were avocados, mushrooms and leeks; Asda didn’t stock dried mangoes, a favourite sharing treat from HISBE, and cereals, rice, bread and washing up liquid were all prepackaged in plastic. However, the total shop would have been cheaper if we’d made it to the check out, but instead, after taking a few photos, we carefully returned all the items and went out though the indoor. On the way back, feeling mildly relieved that the impersonal nature of super markets had, for once, worked in our favour, we marvelled at a swirling display by a huge flock of starlings in the evening sky over the marina, and headed home to the Amelie Rose empty-handed.

We have often reflected on the fact that we don’t have a solution as a society unless we can all shop with less plastic and that means, in our current society, we have to be able to do this at supermarkets. Is there a need to call on supermarkets to stock in bulk for dried and preserved goods? Maybe, but can one imagine a Sunday afternoon, cheek by jowl in a supermarket aisle waiting to dispatch muesli into a bag. A new paradigm is needed, maybe towards smaller stores, better tech but ultimately to a different relationship with our food.

We didn't want to bamboozle you before but here's how the prices compared between the two shopping trips:

Yes the prices are rather different, but I think it is only fair to point out that HISBE is not just trying to go plastic free, they are also ethical, local, good to their employees and suppliers...and in our comparison we didn't always select organic produce from ASDA. Just so you know ;)

What we think is positive is that you can already shop for loads at supermarkets plastic free, you've just got to remember to take your bags!

The results are in, what did we learn...?

The n(i)b of the problem

Maybe we jumped to conclusions...